On Tuesday, the Office for National Statistics (ONS) released its latest figures for inflation. Data showed a 1.8% rise in the Consumer Price Index (CPI) for January 2017, up from 1.6% in the previous month. This means that a ‘basket’ of household goods and services costing £100 in January 2016 would have cost £101.80 in January 2017. The rate of inflation was not as high as expected by economists. Nevertheless, it is getting closer to the Bank of England’s (BoE) inflation target of 2%.

What are benefits of having a low inflation target of 2%?

Inflation in the UK is forecast by the Bank of England to continue its current upward trend (to 2.6% in 2018) driven by higher fuel costs and Sterling weakness. 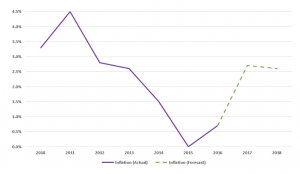 The ONS also released employment and wage growth data. The unemployment figure fell to 1.6 million and remains unchanged at 4.8% – its lowest level in over a decade. Despite predictions of a rise in the jobless count after the vote to leave the EU, the economy remains robust with average earnings also growing, up 2.6% to the end of December, and outpacing inflation.

Emerging Market bonds and equities are enjoying their best start to a year since 2011. Following the unexpected election of Donald Trump in November last year, Emerging Market (EM) equities sold off heavily, falling 7.0% in one week. Fears of a trade war and heightened geopolitical tension were cited as the catalysts for the slump. However, the re-evaluation of what a Trump presidency might mean for the United States in terms of domestic growth and infrastructure spending has carried through to emerging markets. Many emerging market economies are heavily dependent upon the export of raw materials, and since the initial sell off late last year, EM equities have picked up sharply, rising 12.7% and returning 9.3% so far this year.

The US Federal Reserve (Fed) released their semi-annual monetary policy report just before the testimonies to Congress. Economists and analysts were watching closely for some indication as to whether and when we may see an interest rate hike. Janet Yellen, Chair of the Fed, said that it ‘would be unwise’ to wait too long to tighten monetary policy. She noted that the Federal Open Market Committee “Will evaluate whether employment and inflation are continuing to evolve in line with expectations, in which case a further adjustment of the federal funds rate would likely be appropriate”. Yellen expressed concerns that “There is much more capital in the banking system {which is} much more resilient”, but small businesses remain unable to get the loans they require. Furthermore, she admitted that significant economic policy changes are possible which could affect the Fed’s outlook.

Markets quickly reacted to Yellen’s hawkish comments. A further 3 rate hikes are still possible and are reflected in bond markets with 10-Year US Treasury yield bumping up to 2.5%, whilst the US Dollar quickly spiked against other international currencies. As we can see from the below graph, the probability of an interest rate rise in March increased to 44% from 30% on Monday.