New figures released by the Office for National Statistics show that the UK economy has grown by 0.5% in the three months since the UK’s vote to leave the EU. UK GDP growth to the end of September was not as high as that of the previous quarter (0.7%), but outperformed analysts’ estimates of a 0.3% increase. The weaker pound has added strength to exports and service sectors, though to evaluate the true effect of the referendum we await long-ranging data. Philip Hammond, the UK Chancellor, has been consistent in his message saying there will be some difficult negotiations ahead on Brexit, but we are starting from a position of strength and if necessary the government will act to bolster the economy in a variety of ways.

This week the Office for National Statistics (ONS) released personal wage growth figures which show pay increases in the lowest paid jobs. Data shows that the UK’s lowest paid workers have seen a 5.6% rise in their wage (after inflation is taken into account), narrowing the pay inequality gap between the highest and lowest earners from April 2015 to April 2016. 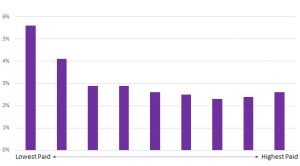 Wages remain below the pre-2008 financial crisis levels, but the improvement is a positive indicator in favour of better wealth distribution.

US Corporate Profits Set to Improve

Profits from America’s top 500 companies have stalled since 2014 and investors hope that a reversal is near. US equity markets have been reaching near all-time highs, underpinned by persistent low interest rates and generally positive investor sentiment. With a rise in US interest rates on hold so far this year, after the central bank predicted rates would rise four-times, the expectation from investors is that the rate rising cycle will resume in December. The hope and expectation is this will coincide with a profits recovery.

At the start of the third-quarter corporate profits season the expectation was that S&P 500 companies would report a 2% decline in profits, but with almost a quarter of the companies in the S&P 500 having delivered results, a profit decrease of just 0.3% is forecasted. Various factors are helping generate a better than expected outcome and they include large banks and technology companies reporting profits above expectations.

Looking at Graph 2, the market is now forecasting a recovery in US corporate earnings growth. If the forecast increase is delivered it will assuage persistent concerns that US stocks are overvalued. 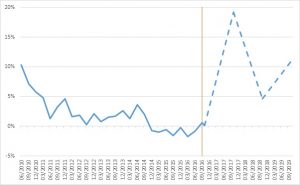 On Tuesday, the pound fell as much as 1.1% within two hours to a new low of $1.2084 as the market eagerly awaited Mark Carney’s testimony to the House of Lords Economic Affairs Committee. With market tensions running high, Carney denied that Bank policies have been regressive, but have supported the economy.

He said Sterling’s recent slump had less to do with monetary policy, and more to do with the announcement of the timetable for Article 50 and the market’s perception of how discussions on Brexit would unfold. On QE, Carney expressed sympathy for savers who have been hit by the programme, but said the Bank was not slavishly relying on QE, and that the Monetary Policy Committee is “mindful” of the side effects of QE on the market. With regards to negative rates, he stated “there is something unnatural to negative rates to some people and there is a confidence effect.” In reference to whether banks may relocate due to Brexit, Carney responded that there is uncertainty amongst banking institutions, and all of these concerns depend on further Brexit negotiations.