For this week’s special feature, we will be focusing on inflation. Over the last few years the world has witnessed central bankers deploying unconventional monetary measures to stimulate growth in the expectation that it would lead to higher inflation.
This has proved to be easier said than done.
Until now.

The UK’s deteriorating current account deficit has not gone unnoticed leading to currency weakness and of course Brexit has shone a spotlight on what was already happening i.e. importing more goods than we are exporting. The net result is sterling devaluation taking place against all major currencies. In short order this has changed inflation expectations. At yesterday’s briefing the Bank of England said it expected inflation to continue rising and to peak at 2.75% in 2018. Other commentators have put that figure even higher, forecasting inflation of 4.0% in 2017. 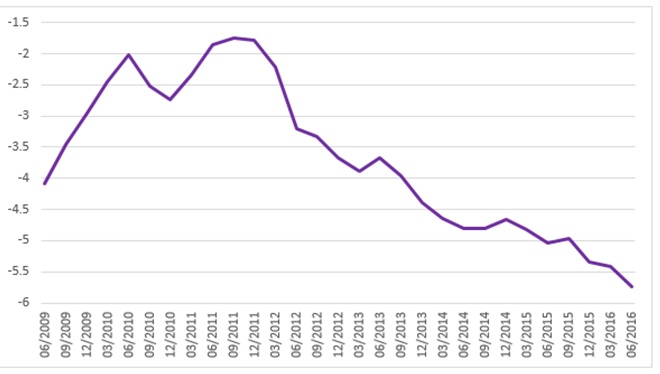 Where it will eventually settle we can’t know for certain and if economic forecasters have taught us anything it is that they are not wholly reliable. However, we can be sure of two things:

The reasons behind inflation are myriad. Some have greater influence than others; some are within the control of central banks and some are not. Classical theories around monetary and structural causes of inflation hint at QE now working and sources of ‘cost push’ inflation being higher i.e. oil prices (vs a year ago) and the potential to import inflation via a weaker pound.

This is where we are now. And Mark Carney, Governor of the Bank of England, speaking yesterday said that he was happy to let inflation run ahead of the Bank’s 2% target, “up to a point”.
The reason for this is a little bit of inflation represents a perceived solution to the UK escaping the lingering and ongoing disinflationary impact post the 2008 credit crisis. For the moment, the Bank is happy for the drop in Sterling to stimulate exports and encourage UK consumers to buy British rather than more expensive foreign imports. The Bank is aware that a period of gently rising prices will be quite useful in inflating away part of the large debt pile we have accumulated. But how far does the Bank let inflation go before it decides it must raise interest rates whatever the cost to the economy?

Not surprisingly the Governor would not be drawn on this point, much will depend on events beyond his control; the oil price, Brexit negotiations, data indicating the strength of the economy and the response of the financial markets and particularly the currency markets, as events unfold.

Our managers too are faced with this uncertain outlook. However, each of them has identified nascent inflation as a significant issue and some are beginning to position their funds to mitigate the effects of a period of rising prices. For example:

With the Bank having taken the decision to allow inflation to run ahead for the time being it does mean that anyone with cash on deposit is almost certain to see the real value of that cash diminish as time progresses i.e. even if interest rates, rise the likelihood is that they will lag any increase in inflation.

Now, more than ever, investors need to take the long view and to diversify their portfolios across as broad a range of investments as possible to preserve value. The principle of Advanced Diversification which forms the basis of our investment process, the variety of fund managers, each with their own style and method of fund construction, the range of assets employed and the sheer number of underlying holdings across the True Potential Portfolios should mean they are ideally positioned to weather any turbulence whatever happens to inflation and irrespective of when the Bank of England decides to put up interest rates.

On Thursday, a legal challenge to the Prime Minister’s power to trigger article 50 was mounted: This is the clause that formally begins the UK’s exit from the European Union. It was heard by three senior judges from the High Court who ruled that the British government does not have the authority to proceed with the UK’s exit from the EU without the approval of Parliament.
It is unlikely that the ruling will stop the UK leaving the EU and the government is expected to appeal to the Supreme Court next month. If the ruling is not overturned, MPs will ultimately decide if and how the UK will leave.

In the immediate aftermath of the announcement of the ruling, Sterling strengthened to $1.2494, its highest level since 7th October – the day a “flash crash” briefly sent it plunging 10% in a matter of minutes. 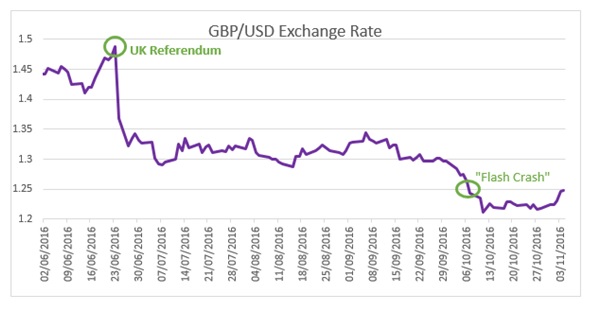 Shortly after the High Court ruling on Brexit, attention turned to the Bank of England’s (BoE) policy announcement. Prior to the meeting, the consensus was the BoE would keep interest rates unchanged at 0.25%, with the markets giving the possibility of a cut in interest rates just a 5% chance.

Those in charge of policymaking at the BoE, the Monetary Policy Committee (MPC), voted unanimously (9-0) in favour of keeping interest rates at 0.25%. Furthermore, the Bank will continue with its quantitative easing programme which has now reached £435 billion. The BoE also revised up its forecasts for economic output, predicting growth for the final quarter of the year to be 0.4%, raising its full year forecast to 2.2%. 2017 projections for growth were also raised from 0.8% to 1.4%. However, the forecast for 2018 was reduced from 1.8% to 1.5%.

The key message from the MPC is that while the near-term outlook is getting stronger, the medium-term may be challenging.

Officials at the US Federal Reserve met on Wednesday for the penultimate time this year to make a decision on interest rate policy for the US economy. Although markets appeared nervous ahead of the announcement, analysts were correct with their forecasts, anticipating no change in interest rates. Inflation, at 1.2%, is moving closer to the Fed’s 2% target, but Janet Yellen, Chair of the Fed, indicated there is a strengthening case for a rise in rates but decided to wait for “further evidence” of progress within the economy.

Nervousness in the US market may reflect the forthcoming Presidential Election on Tuesday, 8th November. However, the Federal Open Market Committee was careful not to associate market uncertainty with concern over the outcome of the election and made specific mention that the Committee does not make decisions in the light of politics.

Next week our attention will be on the US election result, due early on Wednesday morning, and markets could be volatile around the market open. We will be sharing our thoughts, and the thoughts of our managers on the day.