In January of this year our article The World Needs Chips, discussed the shortage of semiconductors. Microchips are an integral part of daily life now, found in anything from cars, televisions, doorbells and even dog collars. A number of factors are contributing to the current shortage, including:

It is the auto industry which is however still struggling the most with shortages of microchips. Cars, and most other motor vehicles, generally do not require the highest quality chips, nor the fastest, which are for example needed for PCs and Smartphones. However, the auto industry needs lots of them.

Lower tier chips come from the mass-producing Southeast Asian companies, such as Taiwan Semiconductor Manufacturing Co (TSMC). Interestingly, TSMC have indicated they expect automotive chip shortages to ease in Q3 of 2021. They say production of chips used in vehicles will shortly rise by 60% year-on-year. This is a whopping 30% increase on pre-covid output.

However, German car manufacturers Daimler and BMW seem unconvinced that the stated production increases will happen. In a recent statement they expressed ongoing concerns, intimating they do not expect to have supplies returning to normal production levels until mid-2022.

Given the dominance attached to car manufacturing in Europe you might expect an announcement from the EU about new semi conducting manufacturing would reference sorting out the current problems facing their domestic industry i.e. continued rising demand for lower-tier chips. However, the EU recently announced that they intend to “Launch into the global premier league of semiconductor manufacturing”. This has drawn criticism from many European manufacturers reliant on lower tier imports and exposed to associated supply risks.

Aside from the difficulty of getting enough chips for new cars, one of the interesting dynamics is that car dealerships have been reported to be buying back “nearly new” cars. This is to help them fill showrooms resulting in second-hand car prices rising sharply, over 20% in some cases. 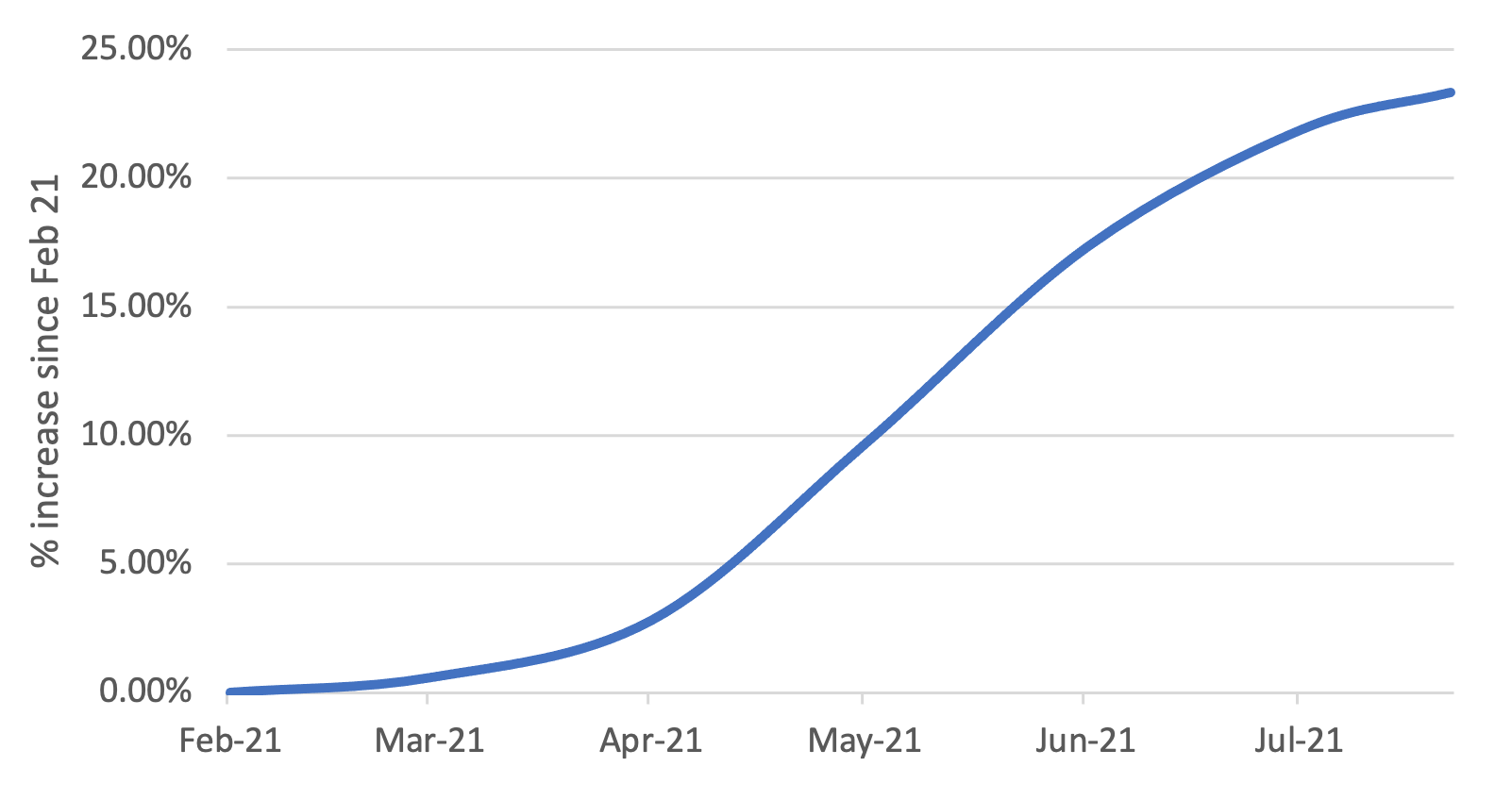 The semi-industry is certainly feeling the pressure right now, and it is possible some manufacturers may switch production away from high quality to lower quality microchips. This solves one problem but could easily create another. Manufacturers of smartphones, tv’s and computer’s would bear the brunt of this shift, resulting in higher prices of these items for consumers.

Adding to the industries challenges is a boom in demand for Graphics Processing Units (GPUs). These units are normally reserved for gaming, 3D modelling and video editing, but they have found a new use – cryptocurrency mining. The high speed of these units makes them ideal for mining cryptocurrencies, which requires solving complex maths problems quickly. When successful the data miner receives cryptocurrency as a reward for completing “blocks” of verified transactions which are added to the blockchain.

The skyrocketing price of cryptocurrencies has made mining a very lucrative endeavour. Thus, demand for these components is completely outstripping supply. There are many reported cases of components selling on the grey market for a 200%-300% mark-up, and a viral video of an eager crowd of shoppers almost rioting outside a newly restocked PC shop. Only this month two men were apprehended in Hong Kong, after attempting to smuggle over 250 computer processing units (CPU’s) by strapping them to their body with cling film!

These examples, unusual as they are, demonstrate the extent of shortages and how they impact prices, encourage production shifts and apply pressure to stimulate capital investment; both in the corporate sector and at governmental level.

Supply and demand for microchips and processor units is out of kilter. It remains to be seen how long the market will take to correct.

In the auto industry there are conflicting reports regarding increased supply. Suppliers like TSMC say supply will rise to meet demand in Q3 2021. End users like Daimler and BMW see shortages continuing through to mid – 2022.

Chip suppliers benefit from shortages, and while keen to talk supply up failing to deliver will help keep prices firm. Alternatively, manufacturers may switch to producing lower tier chips, carrying pricing implications for producers of smartphones, tv’s and laptops. This in turn will impact end consumers.

The possibility of European nations entering the race to increase their semiconductor manufacturing could lead to some interesting dynamics. It could reduce reliance on Southeast Asian based companies but will take years to fulfil. Meantime the pressure on domestic European manufacturers continues.