Out With The Old and In With The ReNewables

This week the news has been dominated by coverage of COP26, a summit taking place in Glasgow. COP26, or to give its full title Conference of the Parties, is where world leaders are meeting to discuss ways to handle environmental factors estimated to be the root cause of climate change.

There is worldwide consensus amongst leaders that changes are necessary, but less agreement about the how and when. One area where change is already happening, and visible, is the transition to renewables – wind, solar, hydro and wave technologies have all improved.

For investors this shift away from fossil fuels brings many questions to the table; two being, what will happen to energy businesses in the future, and what impact will this have on fossil fuel prices?

This year we have already witnessed volatile and sharp rises in energy prices. For example, Natural Gas in the UK is 300% more expensive than at the start of the year. Both Brent and West Texas Intermediate (WTI) Crude oil are both up over 60% year to date. Petrol at the pumps has risen even more, by a staggering 70% in the US! This is a sizeable tax on consumers and a potential drag on economic activity.

In the UK we are also facing up to some very large increases in our home energy heating costs. 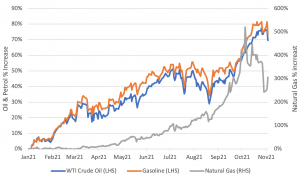 Logic would suggest that a switch to renewables, and the role of governments pushing consumers to make different energy choices such as switching to electric cars, will ultimately drive down demand for fossil fuels like, oil, gas and coal. This should in turn push down prices. However, energy businesses are currently experiencing some very large windfalls from the recent big price increases.

For example, US oil giants Chevron and ExxonMobil have reported sizeable gains in Q3 profits, the latter posting a profit of $6.8bn for the quarter compared with a loss of $680m for the same period in 2020. This has allowed them to increase dividends for investors, helping compensate investors for dividend income lost during the pandemic.

ExxonMobil also promised to buy back up to $10bn in shares, starting next year. While the longevity of big oil companies in the market is debatable, rewarding shareholders after a difficult 2020 shows these businesses are more inclined to return capital to shareholders than invest more into parts of their business that have a poor outlook in a carbon constrained world. Ironically, what this means is investors may be lured back to big oil because lack of investment in drilling activity will help keep supply in check for longer; and potentially keep prices higher for longer.

As mentioned at the outset bringing leaders together for discussions at events such as COP26 play a vital role in policy, in both developed and emerging markets. As regard the latter, sceptics are quick to criticise large developing countries such as China and India for their high CO2 output. However, these regions are global manufacturing hubs and consequently have high energy demands. It is impossible to expect the same timescale for these countries to move to renewables as say a country like the UK who in turn outsource most of their manufacturing to these countries.

In Scotland for example, which now has a very small manufacturing base, 97.4% of its 2020 electricity demand was met from renewable sources. This is a good indicator that we as a nation are getting extremely close to no longer being dependent on fossil fuels for our base electricity needs: Meeting peak demand surges is another matter and replacing ageing nuclear power stations is yet to be solved.

The opportunities that lie ahead for all countries, if dependency on fossil fuels is minimised, remains very substantial. A study from the UK government has shown that over the past 10 years investments in renewable energy have outperformed fossil fuels by a staggering 367%. The government also announced they will be investing £25million in an infrastructure investment company focussed on renewable energy projects in Asia. A small sum, but it is representative of an overall agenda to expand into other territories and gives a flavour of what investors will be thinking about in the coming years as the energy markets evolve.

COP26 will build on what is already happening – a tremendous shift away from fossil fuels to renewable sources of energy.  We are now seeing first-hand the potential renewables have here in the UK and the contribution made to our supply of energy.

Energy prices this year have been hugely volatile and big oil companies are reporting record profits, rewarding their shareholders through dividends and share buybacks rather than investing to expand reserves.

At a global level we are still a long way from eliminating the demand for fossil fuels, however the prospects from implementing renewables brings new and potentially rewarding opportunities for investors.