When we are bombarded with news of slowing global growth and a general mumbling of uncertainty it is easy to drown in a pool of pessimism. Of course, bad news sells but we believe it also operates as a barrier, preventing people from thinking about opportunity. This is highlighted in the UK press daily by the doom mongers who draw their fictional outcomes about Brexit or toll the bell about possible Brexit outcomes, all unknown.

This week, for example, the tabloids focused on the difficult challenges in car manufacturing, in the UK and Germany, but failed to pick up on an improvement in sentiment taking place in Europe. The index picking up on this better trend is the Purchasing Manager’s Index or PMI.

PMI is regarded by economists a forward indicator of business activity. A broader extension to the PMI is the composite PMI. This measures sentiment across both manufacturing and services. PMI’s are survey-based and they identify changes in managers’ perceptions over key business variables such as new orders, inventory levels, production, supplier deliveries and employment. The sample taken is relative to the month prior and data gathered is quantified to a figure between 0 and 100; anything greater than 50 representing expansion and a figure lower than 50 indicating a contraction on the previous month.

In the chart below, we show composite PMI data trends for Europe over time. We see that despite some general difficulties in Europe, manufacturing and services activity has been in expansion mode throughout i.e. the measure has stuck above 50. However, a significant dipping trend started at the end of 2017, hence ongoing headlines associated with economic malaise and elevated fears of recession.

The most recent data point is what caught our attention, a recorded uptick. We know this is slight and one swallow doesn’t make a summer, but the reversal of a negative trend is worth noting. It contradicts recent headline news that Europe is going headlong into recession. 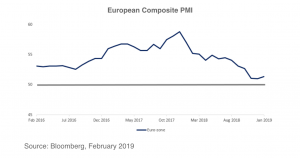 For sure, recent backward measures of growth in gross domestic product show activity across France, Italy and Germany slowing, and even negative growth in recent quarters in Italy, but as we said earlier the PMI is a forward-looking indicator. The fact that it has turned up may prove significant.

Beneath the composite measure (remember the composite PMI is an aggregate measure covering manufacturing and services) Euro-zone manufacturing sentiment has been poor and activity weakening. The manufacturing PMI dipped below 50, indicating a contraction in activity for the first time since 2013. This trend is being mainly driven by Germany which, as an export-led manufacturing economy, has been hampered by the recent introduction of more stringent auto-emission regulations and a slowdown in demand from China off the back of ongoing trade tensions.

Some economists now believe the hit to manufacturing sentiment may turn out to be a blip. It has been reported that Germany’s automobile output rose 8% in January, moreover, talks in Washington between the US and China are on-going to cement favourable trade negotiations before the March 1st deadline. If these discussions are successful, global trade should start to pick up again benefiting nations such as Germany which has a much heavier reliance on exports than most.