November’s US election outcome brought with it a promise of increased public spending. With the Democrats in control of both houses of Congress, as well as the White House, until at least the next midterm elections in November 2022, this promise is about to be fulfilled.

A whopping $1.9 trillion pandemic relief bill was passed early last month, but the Biden administration has even bigger plans. The American Jobs Plan, details of which have been published recently, reveals Mr Biden’s ambitious proposal for $2 trillion of investment in infrastructure. This will reshape the US economy and, it is hoped, will help the US regain its competitive edge over other nations such as China. We examine key areas of the plan and the areas targeted for major spending below.

The priority of the president’s plan is a vast overhaul of US transportation infrastructure. The proposal includes:

A final point of interest in the transportation plans is investment in the electric vehicle (EV) market (a subject we recently wrote about from a UK perspective). With US EV sales just one third of those in China, Biden intends to directly take on the Chinese by promoting domestic supply chains and providing tax incentives for consumers buying American-made vehicles. Federal vehicles such as school buses and US Postal Service fleets will also begin to be electrified.

Finally, the president hopes to be able to provide high-speed broadband internet access to all Americans, with under and unserved communities given priority alongside local governments and non-profit organisations.

The care sector of the US was already under financial distress before Covid came along, with home care workers among the lowest earners in the US economy. The pandemic has only exacerbated this issue and thus crying out for attention. Investment in the sector will ensure increased access to quality, affordable home and community care for America’s ageing population, as well as those with disabilities.

A major benefit of this massive increase in public spending will be job creation, hence the name given to the proposal. The Biden administration believe an extra 2.7 million jobs within the US economy will be created. This comes at a crucial time. US unemployment currently stands at 6% down from its pandemic peak of almost 15%, but still well above the pre-Covid level of 3.5%.

Chart 1: US Unemployment rate over the last 3 years 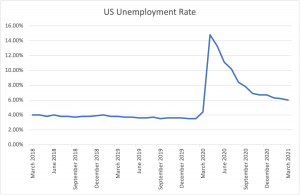 The overall level of those in employment is important, but where jobs are created matters too. US Labour department statistics show job growth in home health and personal care will be far greater than the average growth of all occupations. Perhaps not surprising because demand for care surges with age, and outside of social care, automation is taking away jobs in other sectors. Therefore, investment in the care economy will be a vital source of new job creation to offset losses elsewhere.

Of course, footing the bill for all this spending is another matter. The proposed spending equates to 1% of US GDP annually for the next 8 years!

The obvious offset is more taxation. Within the plan, Mr Biden is taking aim at the corporate sector with his ‘Made in America Tax Plan’. This proposes to increase the corporate tax rate from 21%, set by the previous administration in 2018, to 28%. This has already seen pushback from Republicans, prompting intense negotiations.  Most commentators suggest a rate of 25% is a possible point of compromise and hence agreement.

To put all of this into context we show how corporation tax has changed over time. If 25% is agreed, we can see it is still low by historic standards. 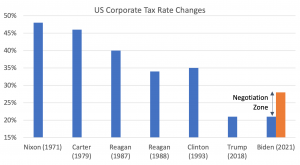 In addition to raising tax at home, the US will lead discussions around global minimum tax rates. This is an attempt to stop multinational companies gaining a competitive edge by shifting profits to tax haven countries.

Currently, U.S. companies do not pay taxes on the first 10% of return on investments located in foreign countries – the proposed reforms would remove this rule. The minimum corporation tax rate would also be set at 21% and would be calculated on country-by-country basis to target tax havens.

Incredible levels of investment are on the US horizon to reshape the economy socially and environmentally.

Increased spending is being matched by reforms to corporate tax codes.

The reforms will not take place overnight – $2 trillion in tax revenue through the various changes will be raised over the course of 15 years.